The Klarstein Carina Bianca Stand Mixer Set is aimed at all those who know how to fully take advantage of their kitchen appliances properly. The blender attachment adds crucial functionality to the Carina Bianca.
With powerful 800W maximum performance, the Stand Mixer can be adjusted to 6 different stages to adapt to your cooking needs. Light to heavy doughs - from biscuit to bread doughs - are easily accommodated, and you can just as easily mix cream and even egg whites. In addition, the pulse function enables you to gently fold other ingredients into egg whites. The attachable splash guard has a pouring spout, ensuring that every last ounce of the bowl's contents reaches its target destination.The keyless chuck makes it easy to switch between the stirring hook, dough hook and whisk in the simplest way, and the large 4-litre stainless steel mixing bowl is the perfect container for the mixing system to work its magic.
With the mixer attachment included in this set, the features of the Carina Stand Mixer are further expanded. Whether crushing fruits for a tasty and healthy smoothie or chopping nuts, the blender attachment always comes in handy with its numerous uses. The mixer uses the powerful 800W motor of the connected Stand Mixer to power its three cutting blades in rapid rotation.
The attachment point for the blender is hidden in the rear part of the engine cover, which can be removed in a simple horizontal movement to reveal the engine mount for the mixer attachment.
To keep your cooking area clean, the pitcher opening is closed by a lid with a rubber seal. During the mixing process, other ingredients may be added provided that they fit through the pitcher's 5 cm opening.
The combination of the Klarstein Carina Stand Mixer and matching mixer attachment
fulfils the highest standards and needs of a modern multi-functional kitchen appliance with its advanced capabilities. 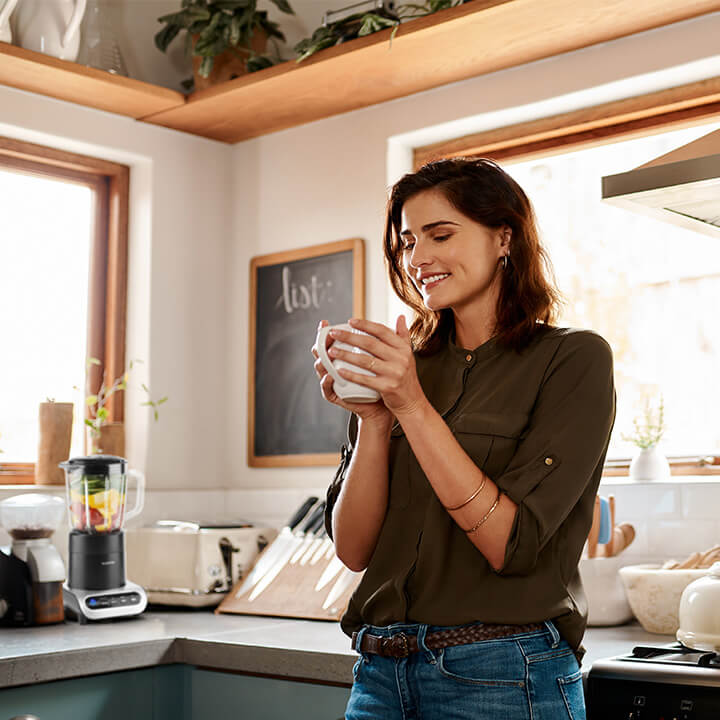